skip to main | skip to sidebar

Independence Day! Americans are awesome/dicks. In other news, water is wet.

Watching the History Channel's "The Revolution" last night on the tivobox with Mom 'n Dad, and I noticed something that I think I must have learned in AP American History but never really thought about:The Patriots were dicks.
They pulled off some really awesome stuff in creating a country like nothing anyone had ever seen before, but also, dicks.
Sure, the British did their share of stupid stuff, like thinking that clamping down with martial law was the way to shut down a burgeoning rebellion, but y'know, we started it.
Why, you say?
Well, the Revolution was started over the Stamp Act, which you probably learned about. Parliament said that we had to buy a stamp to go on, like, every piece of paper we had - I think the show put it as "everything from legal documents to playing cards".
But here's the part that gets me. You probably learned about this as just another obnoxious Parliament thinking they could squeeze the colonies for no reason thing, an affront to liberty, etc. But what the Stamp Act Tax was meant to pay for was the Seven Years' War, which in our part of the world was known as the French and Indian War.
The British sent troops to defend the colonies against attack. And won. But it cost something like 40 million pounds, in 1700s money. Parliament set up the Stamp Act to try to get the colonies to help cover some of the debt they'd incurred.
Yup, the Revolution was started by people who expected their government to give them stuff without them having to pay for it. They don't call them Republicans for nothing, amirite?
The patriots believed in free speech, and exercised it by destroying the printing presses used by people who disagreed with them.
And the Boston Massacre. Oh, man. A bunch of people start a riot, try to kill some soldiers with rocks, the soldiers freak, and some people are killed by muskets not even aimed at them, and somehow this is the soldiers' fault. But you know what's awesome? I didn't know this - John Adams was their lawyer, and saved them all from being executed. He thought that it was important that the patriots not lose sight of basic rights, even if they were for British soldiers.
Anyway, this all just snowballed into some actual fair grievances, which the British just kept slapping down instead of dealing with, and these dicks went on to become some of the most impressive statesmen in history, and rightfully so, considering all they managed to do.

So I say Happy Birthday, America! Hold your head high and say, "We're dicks! And that's awesome!"
Posted by The Bun at 12:56 PM No comments:

Everyone fill out your census! Otherwise you might lose a Congresscritter. Too bad we can't 'lose' Bachmann - oops, she must've fallen behind the couch!
Posted by The Bun at 11:09 AM No comments:

Labels: bite-size from the phoneapod

Got a call from the GOP nat'l committee Friday while I was out. Just registered my DL in MN in Jan. So desperate they're on new people like me on mac n cheese.
Posted by The Bun at 9:25 AM No comments:

Labels: bite-size from the phoneapod

There were a surprising amount of Pentecostals in the Quad Cities.

Something that bugs me just a bit, as someone with long hair (at the moment) - the (Christian at least) groups that want their women to cover their hair or always wear it up, don't allow them to just cut it off and solve the 'angels will want to bone you' problem that way.
Sorry, Pentecostals. You fail at hair. Also, logic.
Posted by The Bun at 9:11 AM No comments:

Jim Croce only really has one song anyway.

You know, in "You Don't Mess Around with Jim", he says, "You don't tug on Superman's cape" as part of a list of things you don't do because something bad will happen to you. But if you did tug on Superman's cape, he'd just be like, "hey, cut it out". Because he's Superman.
Posted by The Bun at 8:52 AM No comments:

Famous People I Want to Punch in the Face: A New Philosophizer Feature

Well, not really new, per se - Kelis was our first installment - but I've decided that such a rich topic deserves more attention.

Anyway, today's famous person I want to punch in the face: Taylor Swift.

Just listen to her song "You Belong With Me".

All about how she's a nerdy girl in love with her best friend, who loves a cheerleader and never sees her.
"She wears short skirts, I wear t-shirts, she's cheer captain and I'm on the bleachers..."
Oh, please. Taylor Swift, you are a beautiful blond princess who I'm certain has never been overlooked by a boy you wanted, ever. Just for once, can't you let an actual nerdy girl make it big with this song, instead of being all "poor me, I'm just not hot enough *tosses blond hair as boys do your bidding*"
Give me a fuckin' break. From all the girls out there who actually do have this problem: shut the hell up, cheerleader.

Also, "Love Story". Good for you, I'm proud you successfully passed sophomore English. You are not Romeo and Juliet, nor are you Hester Prynne. Your teenage love is not difficult and tortured and you are not a special snowflake just because Dad doesn't like your boyfriend. I liked this song a lot better when I thought the chorus said "This love is *typical*, but it's real..."
You are not special. Every teenager thinks this. It's a cliche for a reason.

Labels: punch in the face

Been a long time.

So here are pictures of cats.

This is Loki Tiberius Cat. 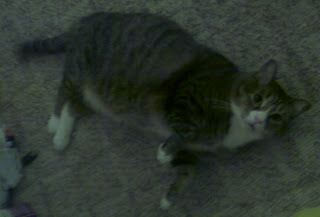 And this is Harvey Charlene Dent Cat. 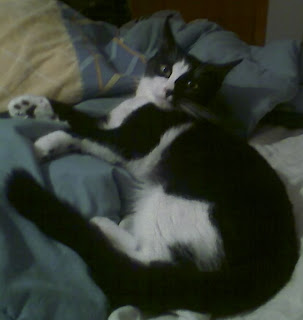 I tried and tried and couldn't find a place on Amazon.com to send in suggestions. And I have several; maybe if I put them here someone will find them!
Thoughts?
Posted by The Bun at 8:00 PM 1 comment:

Pardon me, sir, but I appear to be haX0ring ur network

Yesterday I identified a strange overlap between two fields I never expected to have any commonality - table manners, especially traditional Continental styles, and being a geek. Two unrelated fields, both of which - get this - will train you to be able to eat with a fork in your left hand. Continental manners dictate that you not swap your fork back into your right hand after cutting food on your plate; most people write and mouse with their right hand. So, I realized that my high school French Club dinner training meant that I could eat and do a puzzle or work online at the same time. I'm sure mes profs have all suddenly felt a strange chill go down their spines just now.
Posted by The Bun at 9:53 PM No comments:

Stuff from the tubes

The Bun
I AM ONE HUNDRED FEET TALL!